U2, Nimmo Brothers and Red Wine.

Well, it’s been a while. Painswick Arts Festival was the last time I checked in with everybody and things have been so hectic ever since I’ve let the blog fall by the wayside.

It occurs to me that several rather significant things have occurred since July.  Whether it’s an independence referendum in Scotland, the startling rise to prominence of IS or the passing of Ian Paisley, it seems to me that the world is ever changing and constantly moving on to something new.

It’s strange to think that when such huge and significant changes are happening on a global and personal scale – I’m so totally and utterly captivated by music. You can discuss the ins and outs of politics and I’ll more than likely offer you an opinion but nothing came as natural to me as the vilification I had reserved for my friends and family that asked me what I thought of U2 and, more specifically, U2’s ‘free’ album.

First of all, it’s not free.  Apple paid them each a huge lump sum for the rights to distribute that album for diddly.  Do I blame U2 for releasing an album for free?  Of course I do.  I’m not U2 so naturally I’m incredibly jealous of the (rumoured) $25m that they received.  Each.  If Apple offered me that amount of money to distribute an album for free would I say yes?

But have Apple offered me such a deal?  No.  So therefore I’m pretty annoyed.

Next time I’m at a gig I can guarantee when I try to sell our album (11 tracks of blood, sweat, tears and pure unadulterated promiscuity) somebody is going to point out that he can get U2’s for free, and I will have to contend with that.  Now granted, nobody is shelling my home or invading my homeland or asking me whether or not I want to live in a completely independent nation, but still, it’s pretty annoying.  I’m not in a position where I can afford/negotiate a deal to release an album for free so why would you compare me and my band to U2?

I mean for starters I don’t wear sunglasses when I’m inside.  I don’t want to look like a gigantic fly.  But following on from this point I fully understand why U2 have done what they’ve done.  It doesn’t mean that it’s right or that I like it.  I happen to think that it’s wrong and I definitely don’t like it.  But as I wind myself up into a frenzy of anti-Bono rhetoric I think that it’s worth remembering that I actually quite like U2’s music.  I’d also very much like to see them live one day, but moves like this by big guns in the music business do not help people at the bottom of the ladder, like us. 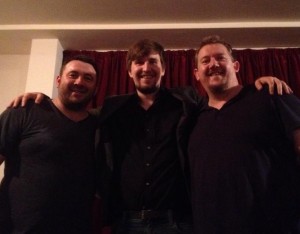 Speaking of the bottom of the ladder that’s where I felt like I was looking up from, at the magnificent Nimmo Brothers after my solo support set for them last month. What a show and a thoroughly nice bunch of blokes as well. If you haven’t already then I recommend that you check them out.

Our Can’t Get Enough video came out as well which has been well received and we’re already working on a video for Dead In the Morning!

Keep a look out for more gig announcements over the next while!  We’re doing another bit of travelling this week with Northampton and Cheltenham as our next stops – hope to see you there!

Fields marked with * are required